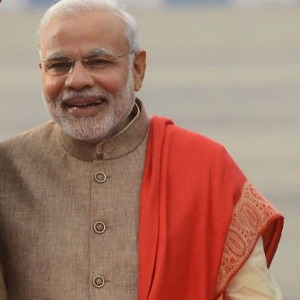 Gone are the days of admiring and envying the stylish attire of movie stars; it’s a different dawn of admiring and envying the stylish wear of Politicians who have their own personality development advisors and personal designers to make them the cynosure of all eyes! The new fashion style icon of India – Prime Minister, Mr. Narendra Modi! Yes, that’s what he has been endowed with.
His visit to so many countries in his first tenure as Prime Minister, has seen him in all the finery of a range of ethnic Indian wear – variations of the Indian Nehru jackets, Chinese collared kurtas and churidars with an exquisite Pashmina stole casually adorning a shoulder, finely-tailored cut jackets, khadi kurtas all of which are complemented well with his Swiss brands of a Movado watch and Mont Blanc pens, not to forget the Bvlgari spectacles. Many have turned up their noses considering it a sign of disdain for the universal, formal and appropriate code of dressing for hi-profile political meetings but the truth is that Mr. Modi loves to flaunt his Indian roots and what better way than to reflect that through your attire! But does it really showcase Indian-ness when the PM is vociferous about ‘Make in India’ all the time?
For someone who started his adolescent livelihood by selling the beverage of tea in Indian trains, Mr. Modi has come a long way both in politics and fashion knowing exactly how to carry every outfit with élan. ‘Jade Blue’ a fashion brand in Ahmedabad founded by Bipin and Jitendra Chauhan has Modi collection. Mr. Modi seems to be their patron for more than two and a half decades and not after becoming the PM – in fact since 1989!  From one solitary store to a chain of 28 stores today, Jade Blue has grown by leaps and bounds. Both buyer and seller had humble beginnings then. Mr. Modi was an RSS pracharak. Jade Blue, then known as ‘Supremo Clothing & Men’s Wear’ was situated in the modest location of Ellis Bridge in West Ahmedabad. The buyer rose to the echelon of a Prime Minister of the most secular and democratic country in the world and the seller located in a snobbish locality of ‘CG Road’! Today, Jade Blue has its own line of ‘Modi Kurtas’ (after prior permission from the man himself) with 2000 Modi kurtas created every month with a bulk of the purchases being made by non-resident Gujarati’s in their 40s!  The Chauhans have moved with the times and today Jade Blue takes pride in its website that showcases exclusive menswear and fashion merchandise – from formals and casuals to customized offerings in menswear they also offer a vast and rich variety in ethnic wear for men! With a turnover of Rs 180 crore, the Chauhans are living a dream and are in an expansion mode and they do have one person to thank for this bountiful blessing – the PM of India, Mr. Narendra Modi!

Such has been the association that today, the PM and the store owners exchange a lot of ideas on his attire and perfect his suggestions on various designs with critics passing snide remarks that the PM changes his clothes at least 5 times every day. Colorful and crisp, these are made from linen-polyester and linen-cotton that make them easily washable and quick to iron.
His dark pin-striped haute couture suit at the hi-end tea party with President Barack Obama set tongues wagging!  Every pinstripe of the suit had the inscription of the words ‘Narendra Damodardas Modi’ embellishing the suit across, in microprint and this, including his trousers and jacket, something President Obama noticed immediately, something  the former Egyptian President, Hosni Mubarak had indulged in, much before Modi, in the years 2009 and 2011!  The cost of Modi’s suit, a whopping $16,000 (a vulgar sum that was more than eight times the average annual salary in India).   Ooooh, what a backlash!  Criticism came in like a Tsunami and Mr. Modi auctioned the suit for nearly $700,000!! The money was used towards a project to clean up the River Ganges.

His visit to the USA left President Obama saying ‘I really would like to try the Modi kurtas’ – could anything be more flattering? His foreign visit to Bhutan saw him wear a crisp khadi kurta while the BRICS Summit in July 2014, his first international summit after becoming the PM saw him in a very befitting dark blue full sleeve suit with Nehru collar et al. The light ochre coloured kurta and bright shawl he donned on his visit to the Pashupatinath temple in Kathmandu, Nepal in August of 2014 is just one amongst his enormous collection of kurtas and shawls!

Just when people in the US thought he would emerge from the flight in one of his many trademark Modi kurtas, he left eyebrows raised for a when his arrival at JFK Airport in New York, US in September, 2014, with his wine-coloured burgundy suit that set the trend for men’s attire that summer!

Who can forget the orange pashmina shawl casually thrown over one of his many kurtas when he received President Obama and his wife Michelle during their visit to India.

A black suit during his meeting with the Chancellor of Germany, Angela Merkel, in April, 2015 and a stark white Kurta Churidar jacket to suit the mood when visiting temples in Japan this man knows how to carry them as if he were on a ramp, graciously and with poise!

His choice of colors has also been a matter of debate -canary yellow, lime green, sky blue and an obvious saffron; colors that represent his political party – the Bharatiya Janata Party! Call it tactical if you may but it has worked like a wiz. People have noticed Mr. Modi not because of his vision of a highly progressive India, not because of the camaraderie he has extended to his global neighbours but also for his very distinct style of fashion. While some critics have called it an inappropriate dressing sense, we call it a case of sour grapes. ‘Veni Vedi Vici’ – perhaps that is what Mr. Modi would like to say to his critics. Want to try one of the Modi kurtas? If you can look chic and elegant, why not? The show must go on …