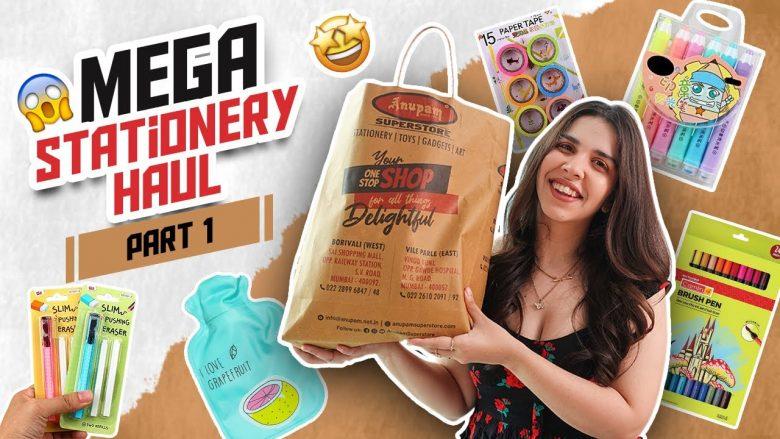 Here comes the popular lifestyle blogger Heli Ved! Heli favorite among kids and teenagers for her popular stationery haul on amazon and also women can’t stop watching her videos for the amazing makeup and organizational skills she has. Her Instagram feed is so fresh and chic that you are bound to fall in love.

In one of her most-watched videos, Heli shared the most useful stationeries that she got under or around 99 rs. At the starting of the video, she introduced herself in a usual way and then made us laugh by saying, “sorry if I am entering your personal space as I am sitting too close to my camera.”

Later she explained that as the items that she’ll show are too small in size, she has to sit closer to the camera. She stated that she loved using stationeries as a kid and during school, she often used to get remarks like, “do not use this my decoration”.

Heli said that she doesn’t use stationeries now but she keeps purchasing them for stationery haul on amazon videos or keeps them exclusively for planners. She also mentioned that she donates stationeries to poor kids or the kids of the workers in her building. This was in response to many followers that asked her – what she does with the excess stationery.

Heli is pretty impressed by this memo pad as it has a keychain to it. She said that in an early video when she mentioned these pads as keychains, many of the viewers told her it was a Japanese flash note. To which she thanked her viewers and said that she can have these notes as a to-do list and can remove them once the work is done. Moreover, they look really cute as a keychain.

The next item on the list is Luxor Finewriter Assorted color pen set, which comes in various colors and has a very fine grip. These pens are super smooth and one can go for orange, sky blue, pink, green, and royal blue if looking for fun or looking for buying the pen individually. Heli said that she has used this pen a lot during her school and college days.

Heli looked smitten by it and said that for the first time her aunt introduced her to glue drops. She showed me how to use them and said that it’s not as messy as other glue options available and does the work pretty efficiently. She later said that however you can have a hold like Feviquick but can stay away from the mess of Fevicoal. She said that ever since she got introduced to these glue drops she hasn’t used any other alternative.

The next item that Heli showed was just wow! And you can gift it to either the kids who are learning fine arts or for that matter anyone who is interested in learning it. These geometric rulers looked perfect for making mandala art and even if you are having them as an adult you can rediscover your passion for arts. A must-have indeed!

Heli showed this cute item and said that she just can’t get over it as it can be used as an organizer at various places. This item will not only help you in organizing your stationaries but can be used to hold your makeup essentials. Heli looked totally in awe of this storage box.

Heli introduced this pen holder as an expensive-looking one and it really look expensive for its original price (120 Rs.). The holder had a beautiful transparent blue color and looked extremely elegant. Heil said that stationeries like these put the aura in higher vibrations and you feel like working with more dedication, and we couldn’t agree more. Aesthetics indeed play a major role in uplifting our mood and making us feel productive.

When Heli introduced the next stationery and said that it has all the staples that are required, i.e. two ball pens, a corrector, a glue stick, and a highlighter. She later said that most of the stationeries are kid-centric but this thing is for adults and can be used or gifted as an office essential.

Helie confessed that she used to use glitter pens a lot when she was in school and she said that she still can’t get over them. Also, the moment she unpacked them she was in awe of the smoothness and the amount of glitter the pen had.

The next thing Heli showed was a bunch o colorful decorative glitter tapes, which she said are quite thin yet the options available were amazing. She later said that she will definitely be using them while making planners.

Here comes the most exciting part of the video. While Heli showed her dom erasers she said that in her lifetime she has never used her eraser fully and it often used to get lost in between. Later she asked the viewers if anyone has used their entire eraser. The eraser looked super cute and came in a dom.

Heli got this set of 30 pencils in just 99 rs., which is indeed a steal. Also, the finish of these pencils was quite different to then of normal pencils and it comes in five different vibrant coloures. These HD pencils were quite smooth and extremely pleasing to the eye.

Read more shoppable stories from Gift Guide only on Hoppingo